Christ is the key figure again in the last paragraph of this essay. In 1673, Ovens subscribed in the collection book of the Lutheran church of Saint Christopher in Friedrichstadt and promised to deliver a ‘memorial ornament’. He fulfilled this in 1675 by painting The lamentation of Christ, which up till today functions as the altarpiece of the church in which Ovens would be buried in 1679 [41].1 The painting shows the dead Christ, taken from the cross. Mary supports her son under his arms and raises her eyes to God in her grief; at the same time she exhibits his body to the viewer as a sacrifice made for our sins. Mary Magdalene sits at Christ’s feet. An angel holds the right hand of Christ and points to the bleeding wound of the Saviour. The apostle John stands in the left background, in front of an almost black rock, his hands clasped in prayer. The face of Nicodemus, who also folds his hands to pray, is almost hidden behind the wing of the angel.

The lamentation of Christ in the Begijnhof in Antwerp, one of the most dramatic altarpieces of Van Dyck, very likely served as (one of) the model(s) for Ovens [42].2 Until 1794 this lamentation stood on the high altar of that church, where Ovens certainly studied it.3 On 6 March 1628, Van Dyck made a will in which he expressed the desire to be buried in the choir of the Begijnhof.4 His altarpiece was therefore partly meant to be his own memorial. If Ovens was aware of this fact, it might have been an extra impetus for him to model his own altarpiece after Van Dyck. In doing so, he could try to measure up to the great master he so admired. Although Ovens’ altarpiece clearly is a homage to Van Dyck, there are numerous differences between the two works. The Christ of Ovens does not lay on a shroud and his legs are close together. He is depicted in mirror image, and whereas Van Dyck only paints a small scar of Christ’s lance wound on his right side, Ovens has Christ bleeding, adding to the drama. The pose of the bodies and the heads of the two Marys is comparable. However, Van Dyck’s Mary does not hold Christ, but stretches out her left hand in despair. Instead of collecting the blood of Christ, a kneeling Mary Magdalene kisses the wound on his left hand. John enters the scene from the right. The angel and Nicodemus are absent in Van Dyck’s painting. Ovens used a darker colour palette – his painting is characterized by the use of a strong clair-obscur.

Van Dyck made a small-size replica of his altarpiece with minor variations [43].5 There, Jesus has acquired a halo, and some rocks and plants can be detected that are missing in the full-size painting. The nails from the cross lie further away from the washbowl and some hanging plants have been added to the rocks at the left. These details tell us that the engraver Paulus Pontius the Elder (1603-1658) followed the smaller version and not the large canvas for the reproductive print, reversed, that he made in the 1630s [44].6 Ovens thus could have known the composition of Van Dyck’s Prado altarpiece in Amsterdam. Since he painted the lance wound on the right side of Christ’s torso, whereas Pontius depicted the scar on the left, Ovens probably did not base himself on the engraving for the Lamentation – one of his last known works.7 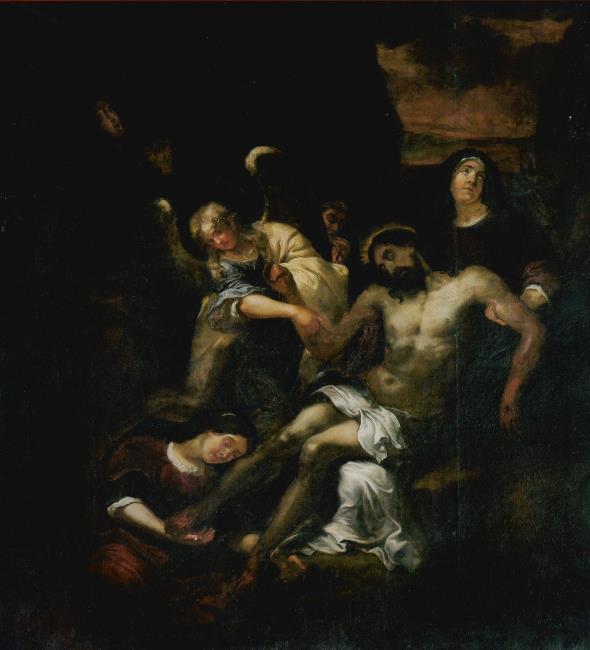 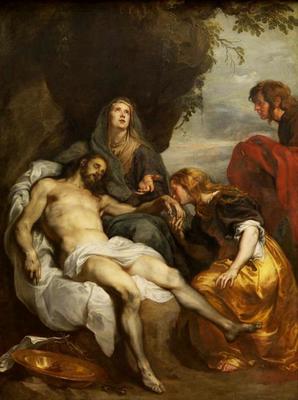 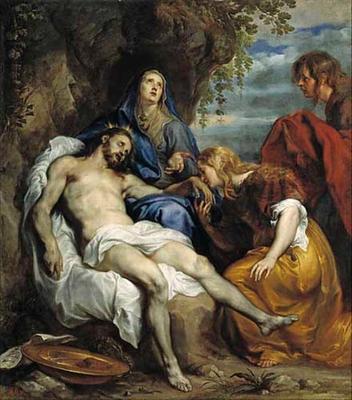 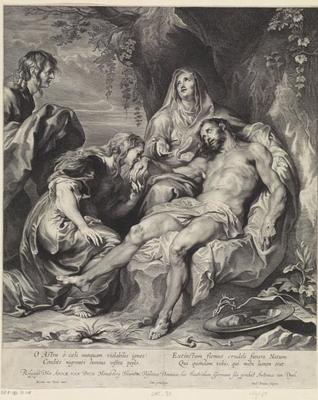 1 Köster 2017, p. 273, 339, Qu. III.B.1 (left column), fig. 315 (right column). The English translation of the Latin text in the cartouche at the bottom of the painting’s frame reads: ‘As a mark of honour to the most Holy one with great merit for the world and to his only Saviour Jesus Christ Georg Ovens very piously devotes this painting. Anno 1675’.

3 The author refers to the previous paragraph in this essay, in which it became clear that Ovens visited the Begijnhof in person.

4 Three of Van Dyck's sisters lived as nuns at the Begijnhof. Presumably, Van Dyck executed the painting as a gift in memory of one of these, Cornelia, who had already died there in 1627.

7 Of course, Ovens could have deliberately deviated from Pontius’ engraving, but it is doubtful if he even used it as a model at all. Van Dyck’s original altarpiece of over three meters high would have been a far more impressive example to follow than a much smaller black and white reproductive print, no matter how handsomely it was created. The bible book of John the Evangelist (19:34) does not mention which side of Christ was pierced. The majority of (contemporary) artists showed Christ’s wound on his right side. Those on Christ’s right side are the ones to be saved by the blood that he shed for them (Matthew 25:32-33 and 26:28). See Gurewich 1957.