13.7 Ovens’ Resurrection of Christ: an Emulation of the Bahr Epitaph

In 1667, Ovens completed the Resurrection of Christ [34] as part of the altar in the Lutheran Saint Michael’s church in Eutin, Schleswig-Holstein, later named after the founders Christian Cassius (1609-1676) and his second wife Anna (1605-1673).1 Christ, in a red robe, rises from his grave on a cloud. His shroud is laid out over an empty sarcophagus and its lid. An angel in white garment behind the sepulchre has just removed the slab. His action is described only in one of the four gospel accounts of the event, Matthew 28:1-6. None of these gospels, however, describes Christ’s exit from the tomb. And although a victory banner is important in the repertory of the Resurrection, Christ surprisingly does not carry one. That deviation reminds of Pieter Lastman’s (1583-1633) Resurrection from 1610 [35] and 1612 [36] which Ovens probably knew.2 For Christ’ body type, his outspread arms (recalling his crucifixion), unflattered face and the strong light-dark contrast that emphasizes the expressive power of the miracle taking place, Ovens will also have looked at Lastman. Contrary to the painting of the latter artist however, Christ’s crucifixion wounds cannot be discerned in Ovens’ work, perhaps because it is partly damaged. The scene of Lastman’s three approaching Marys in the right background in the Getty painting, lighted by rays of the rising sun, is taken over by Ovens in mirror image. In the right foreground, Ovens traded Lastman’s halberd for a club, placed diagonally as well.3

In Köster’s opinion, direct Flemish influence in Ovens’ composition is less readable.4 However, it has not been noticed before that the fleeing, helmeted soldier in blue garment at the bottom right was derived from the tomb guard, dressed in blue as well, in the same location in the centre panel of the Snijders Triptych from 1659/60 [37], painted by the German-born Flemish Baroque artist Jan Boeckhorst (1604/5-1668).5 In order to prevent copying too slavishly, Ovens shifts the weight of the running man to his right leg. Furthermore, he emulates Boeckhorst by providing his soldier with a sword in a sheath on his left side and one in his hands that he points at the risen Christ – thereby directing our eye at the Resurrection – while the figure in Los Angeles stretches his arms forward in agony. Boeckhorst’s back guard protects himself against the miraculous happening with a sword and might have been used, with some adaptations, by Ovens for a preliminary drawing.6 The Snijders Triptych served as a memorial tribute to Mary Snijders (1588-1659). It was placed above her grave, next to the entrance of the sacristy of the Begijnhof in Antwerp, where Mary, the sister of the famous still-life painter Frans Snijders (1579-1657), had been a beguine or nun. Ovens must have studied the triptych in person. It was not reproduced in print and it seems unlikely that another artist provided him with a drawing after it.7 Up till now, a drawn copy by Ovens [38] of a painted portrait by Anthony van Dyck in the cabinet of the Antwerp merchant and art collector Sebastiaan Leerse (1584-1664) was the only (formal) indication that he visited the city on the Scheldt.8 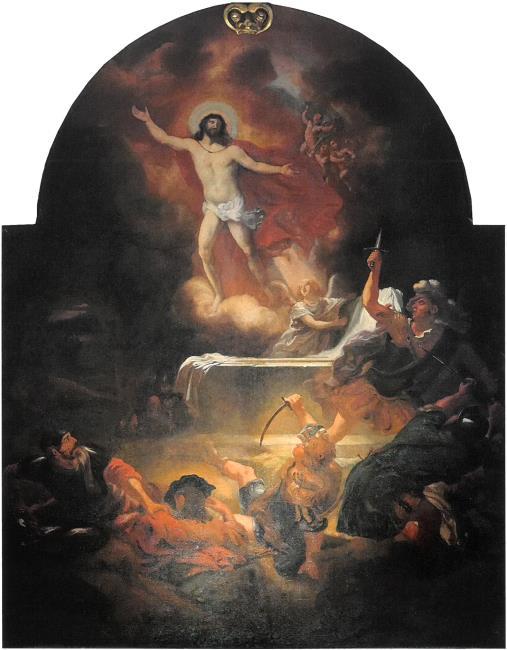 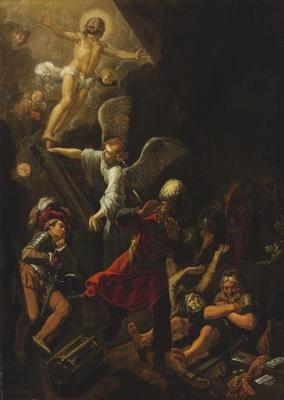 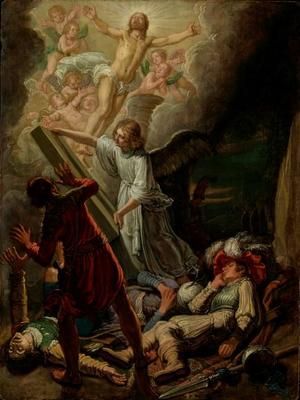 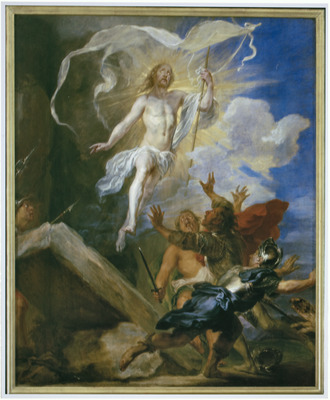 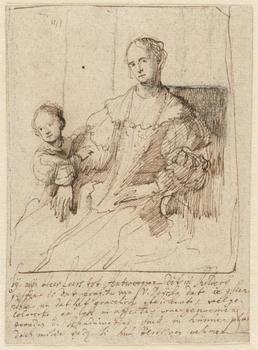 Despite its dependency on the works of Lastman and Boeckhorst, Ovens’ Resurrection is primarily an emulation of the Bahr epitaph from 1666 in the aisle of Saint Michael’s church [39], a fact wholly overlooked by Köster.9 Cassius had travelled widely and was probably familiar with the iconography of several altarpieces. Most likely, he wished to outdo the rather mediocre Bahr painting, executed by an unknown artist, by commissioning a more impressive Resurrection from the then famous Ovens, with whom he will have determined the composition in mutual consultation.10

The Bahr sarcophagus with a stepping edge occupies nearly the whole width of the painting, thereby blocking a large part of the background. By moving the sepulchre to the right, Ovens created a three-dimensionality absent in the Bahr epitaph. In the process of making this choice, Ovens might have been inspired by Rembrandt’s Resurrection from 1634/39 [40], where the tomb is depicted in a fairly similar location and painted parallel to the picture plane as well.11 Although he copied the angel, Ovens slightly altered the layout of the shroud. He improved the incoherent arrangement of the guards by positioning his four watchmen in the front and the soldier in Roman dress with a plumed hat at the right back in the form of a half circle.12 The latter raises his dagger against the Risen, thus connecting the bottom part of the painting with Christ, while the soldiers in the work from 1666 barely seem to notice what is going on around them. Ovens’ left soldier and the guard he is trying to wake up by putting his hand on his shoulder, echo the figures on the same side of the Bahr epitaph. However, Ovens’ soldier seems to try to escape from the graveside and thereby increases the dynamics. Ovens replaced the sleeping man with a younger soldier, his face lost in profile, thus adding to the great mutual variety among his anxious guards – who all wear different outfits and headgears – compared to the figures of the unknown painter.13 Ovens’ falling soldier in the lower center, drawing his sabre in defence, could have been taken over somewhat freely from Rembrandt’s tumbling guard in the middle of his Resurrection.14 The stiff Bahr soldiers and their coarse faces betray the hand of a provincial artist; yet he seems to have had knowledge of Boeckhorst’s risen Christ, considering the almost corresponding position of the arms and legs – but of course, the anonymus perhaps based himself on another source, for instance a print. 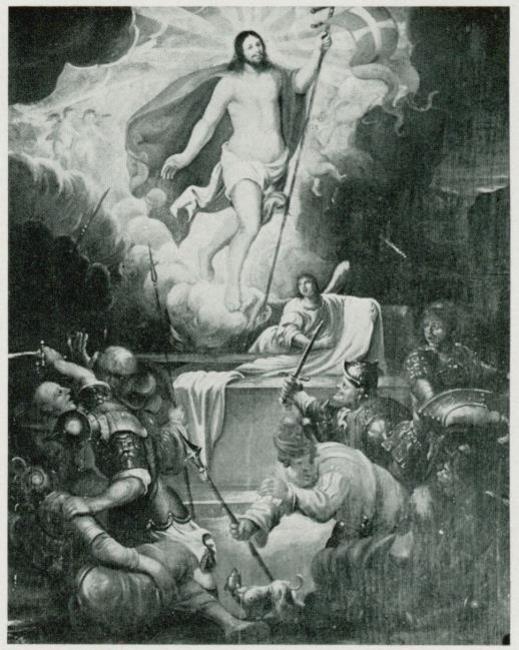 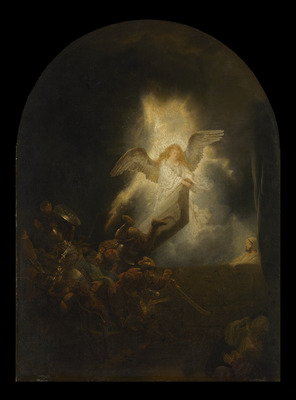 2 For these two paintings by Lastman: Walsh 1995, figs. 1-3. Broos 1972, p. 85 is convinced that the first known version of the Resurrection by Pieter Lastman was the prototype for Rembrandt’s painting of the same subject, now in Munich [40]. Lastman’s 1612 painting was not known when Broos wrote his article; it only resurfaced in 1987 after the private owner sold it. The centre of both of Lastman’s Resurrections is dominated by the angel lifting, seemingly effortlessly, the large stone slab of the tomb. See also Broos 1977, p. 60, Br. 561. The Christ in the Resurrection by Rembrandt does not carry a banner either, but there is no proof that Ovens ever saw this painting. The position and appearance of Christ in his tomb resemble earlier depictions of Lazarus (such as Rembrandt’s Raising of Lazarus of 1630/32, RKDimages 52643). See Bruyn et al. 1992-2014, vol. 3 (1989), p. 280-288, A127, esp. p. 284, 286.

5 Schlüter-Göttsche 1971, p. 84 mentions ‘a’ Resurrection without an angel by Jan Boeckhorst that – if we are to believe her – shows a composition similar to a depiction of Jan Lievens of the same subject. She seems to refer to the middle panel of the Snijders Triptych. According to Schlüter-Göttsche, who does not provide any concrete information, the work by Lievens is only known through ‘a’ reproductive engraving of Caspar Luyken (1672-1708). My research, however, shows that the print by Luyken was included in Taylor 1700, vol. 3, folio 214 and was done after a drawing by Caspar’s father Jan Luyken (1649-1712) instead of Jan Lievens. Born in Münster, Boeckhorst settled in Antwerp around 1626, where he trained with both Jordaens and Rubens, eventually becoming a close collaborator of the latter. The Snijders Triptych is one of the artist’s most famous works. See Huvenne et al. 1990, p. 152-153, no. 6, ill.; Galen 2012, p. 194-199, no. 72, ill. The work was sold by the Antwerp Begijnhof in 2007 and acquired by the Los Angeles County Museum of Art in the following year. See Crichton-Miller 2011, p. 80, ill. Crichton-Miller claims, undocumented, that the work was commissioned by the Snijders family; Galen 2012, p. 196 rightly states it is not clear if the Begijnhof or the relatives of Mary Snijders ordered the altarpiece.

7 Ovens will have been in Antwerp between c. 1660, the year in which the Snijders Triptych was probably completed, and 1667, when he delivered his Resurrection. In 1663, he left Amsterdam for Northern Germany for a prolonged period of time. Of course, Ovens might have travelled to the city on the Scheldt more often. Perhaps he visited Antwerp already in the 1650s or even earlier.

10 The Bahr epitaph is a memorial for the respected Eutin mayor and surgeon Thomas Bahr (1579-1649), who guided the town through the difficult 30 years war (1618-1648), and his wife Leveke (died 1660). It was commissioned by the children and grandchildren of the couple. See Peters 1958, p. 119 and Schlüter-Göttsche 1971, p. 86, fig. 7 and p. 88, where she summarily notices the close ‘thematical’ relationship between Ovens’ Cassius altarpiece and the Bahr painting, without comparing the two works in any further way, and even keeps open the possibility that Ovens might have executed his work without knowledge of the 1666 altarpiece.

11 Of course, the composition of Rembrandt’s painting – which also has a rounded top – differs from that of Ovens’.

12 The soldier at the right edge, grabbing his helmet and the one, sleeping at the end of the tomb do not play an important role in Ovens’ composition.

13 Many artists from the Low Countries provided each of the soldiers in their Resurrection scenes with different kinds of headwear, see for instance Lastman and Rembrandt (illustrated here).