13.4 Young Woman in a Blue Satin Dress : Sources and Copies

This bust-length painting from 1655 shows a young woman in three-quarter profile, slightly inclining her head to the right and set close to the picture plane [17]. She is seductive by her partially exposed breasts and challenging look. The woman gently keeps her loose, revealing chemise from coming farther down by holding her right hand just beneath her bosom, thereby drawing attention to the ease with which more could be revealed. A costly blue dress of shiny satin with loose-fitting sleeves, a pearl-studded black velvet beret, adorned with a bow-like jewel above the rim, three rows of pearls in her hair, a droplet-shaped pearl earring, a string of pearls around her breasts and a gold brocade drapery over her bottom right arm enhance her attractiveness. The white chemise interacts with the black scarf, and the dark background stands out against the woman’s smooth, palpable flesh.

The red cloth under the woman’s bottom left arm and hand, seemingly thrown over a part of a balustrade, suggests depth, a device Ovens possibly took over from Rembrandt’s 1639 Portrait of Aletta Adriaensdr and Hendrickje with fur Wrap, painted in circa 1652.1 Ovens confronts the warmth of the red with the sitter’s cool blue dress and black left cuff. The balustrade’s close placement to the picture plane reminds of Rembrandt’s two famous self-portraits dealt with above [5-6].

The almond-shaped brown eyes, eyelids, high eyebrows, cheeks, slightly smiling mouth, shape of the chin and rounded jawline of the woman compare well with those of the only known sure portrait of Ovens’ wife Maria – painted in circa 1652, some three years earlier [18] – and make the identification of the model as Ovens’ spouse plausible. Based on these facial resemblances, the painting discussed here has been regarded as a portrait of Maria Ovens.2 However, the woman’s partially visible bosom, as well as her archaic dress, seem to rule out this identification and prompt the notion that the painting should be considered a tronie – a study of an interesting character (in this case an attractive young woman) in bust- or half-length format, that cannot be identified with a (historic) person – rather than a portrait in the true sense of the word.3 It appears that the fancy picture is to be understood as an image of a courtesan, since the similarities with 16th-century Venetian depictions of courtesans are obvious.4

Never before it has been remarked in the literature that Ovens’ work goes back to tronies by Amsterdam artists, such as his probable teacher Govert Flinck [19], Ferdinand Bol [20] and Willem Drost (1633-1659) [21] – all students of Rembrandt – as well as Jacob Adriaensz. Backer [22].5 Ovens surely must have seen one or more of these paintings.6 He might have taken over the placement of the hand and the small cleft between the ring and little finger from Flinck. The hands are positioned in roughly the same way as in Bol’s painting.7 If Ovens knew Drost’s Young Woman in a brocade Gown of about 1654, one of the boldest variations on the courtesan theme, it seems likely that he was inspired by it: his model is shown in mirror image compared to Drost’s sitter.8 It is clear that the genre in general, rather than any one painting of a courtesan in particular, inspired Ovens. 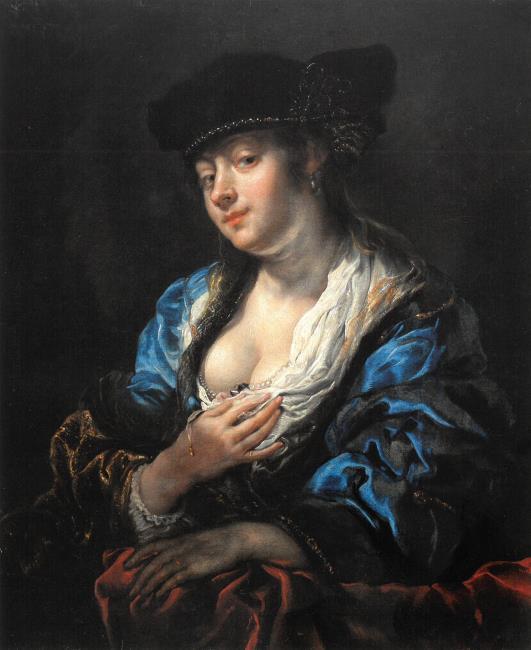 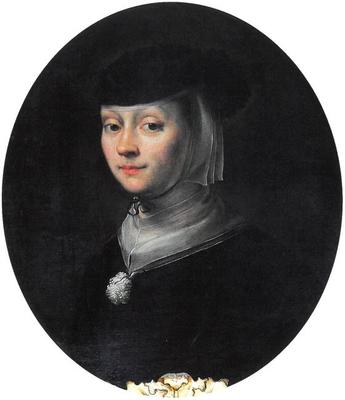 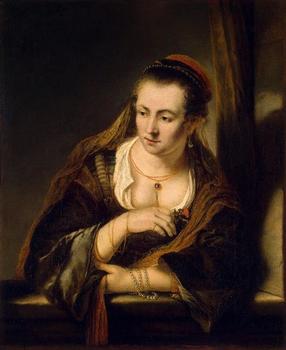 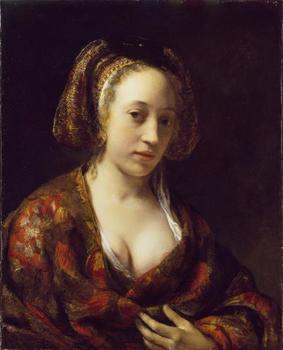 A painting attributed to Paris Bordone (1500-1571) [23], perhaps in Petworth House now (or a version of it), is a source Ovens may have freely drawn on.9 He could be familiar with the work, as it was almost certainly part of the collection of the Amsterdam patrician Gerard Reynst (1599-1658) that was to be seen in his house on the Keizersgracht from 1639 until 1670, when it was sold. During this period, several collections in Holland containing 16th-century Italian art were accessible to artists.10 Bordone’s courtesan glances to the side, which makes her less self-confident and direct. Ovens did not base himself directly on Venetian prototypes, since his Young Woman shows a greater similarity with the courtesans of his Dutch contemporaries. 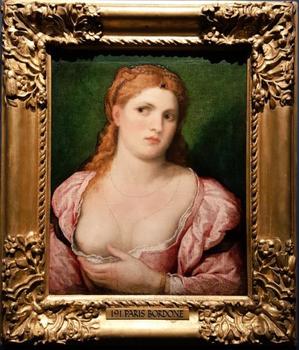 Around 1654/55, pictures of courtesans appear to have flourished in Amsterdam.11 Through his own Young Woman, which Ovens will have executed in Friedrichstadt, he transferred the popularity of this composition type from the Dutch Republic to Northern Germany: if we are to believe the Dane Johann Dauw (1679-1723), copies of the painting were to be found in many private houses [24]. In his book on painting from 1721, Dauw made it clear that he took offence at the work, noting that Ovens persuaded his wife to be painted by him for commercial purposes ‘and so coquette, as if she was the most light-hearted slut of the world. […] Ovens, a painter from Holstein, makes a prostitute of his wife’.12 Evidently, Dauw considered the young woman as Ovens’ wife, and did not see her as a model. However, it is unthinkable that Ovens would have portrayed his respectable wife as if she were a courtesan, which would certainly have compromised her social position.13 Dauw was not a contemporary of Ovens, and published his remarks 66 years after the execution of the Young Woman. The fact that Dauw was a priest probably also contributed to his disapproval of the work.

It is not exactly clear what purpose Ovens had in mind with his seductive painting. In 1675, he made an etching after the picture [25], either to meet an already existing demand for reproductions of the painting or to make it well known.14 Apparantly, the sensual ‘portrait’ of the wife of the then famous artist – a type of painting unknown in Schleswig-Holstein, but obviously considered appealing over there – became intended for public consumption. Ovens might also have created the print partly for his private purpose; the fact that he probably still owned the painting (or a nearly identical version of it) twenty years after its execution indicates it was not made on commission and must have had a special meaning and personal significance for him.15 The intimate work will have passed on to duke Christian Albrecht (reigned 1659-1694) and/or Frederick IV (reigned 1695-1702): a ‘Picture of a woman with a blue dress, by Ovens’ is mentioned in the 1695 inventory of Gottorf castle.16 Furthermore, Dauw records seeing the original painting there.17 Remarkably, here the sitter is not considered as Ovens’ wife. The description actually partially matches the present author’s given title of this painting, which would end up as Ovens’ most copied work in Schleswig-Holstein. 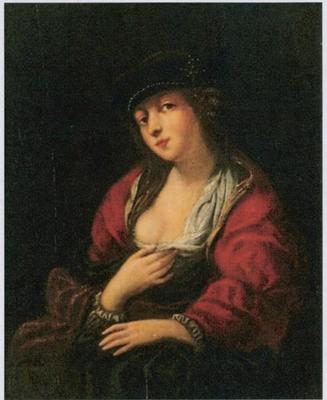 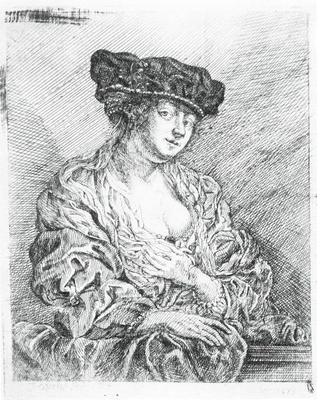 3 Köster 2017, p. 287 believes, without explanation, that the ‘portrait’ can also be considered a tronie and on p. 290 incorrectly calls the painting a ‘portrait in the form of a tronie’.

4 The cloth over the balustrade also adds to the amorous sphere: in the 17th century, red was already considered the colour of love. See Van Hoogstraten 1678, p. 223.

6 The images of courtesans in De Passe 1630, a popular publication, were probably also known to Ovens. The position of the hand of Ovens’ Young Woman, just beneath her bosom, resembles the one of the courtesan in engraving no. 11 (which is not to say that this print was a direct source of inspiration for Ovens). See also De Witt 2016, p. 140-142, no. 40, ill. Schlüter-Göttsche 1971, p. 87, fig. 9, p. 89 claims there is no doubt that the numerous ‘portraits’ of shepherdesses by the Utrecht artist Paulus Moreelse (1571-1638) inspired Ovens to create the painting being discussed here [17]. Though their pictorial scheme resembles that of the scantily dressed women of Ovens’ contemporaries in Amsterdam (see figs. 19-22), the pictures by Moreelse belong to the genre of the pastoral courtesan, thus making the comparison of Schlüter-Göttsche somewhat less sharp. Furthermore, she does not question where Ovens could have seen the work of Moreelse – a visit to Utrecht by him is not documented.

8 Despite certain similarities between these two works, it is less likely that the two artists explored the possibilities of the Venetian courtesan theme together. Ovens is not documented in Amsterdam in 1654 and 1655. Drost probably moved to Italy in the last mentioned year or in 1656. Of course, Ovens could have visited the city on the Amstel briefly in the mid-1650s. Contacts between Ovens and Drost are not known.

9 According to Bikker 2005, p. 24, 71, fig. 8a this courtesan picture attributed to Bordone is known only through a drawn copy in the 1627 illustrated inventory of the Venetian nobleman Andrea Vendramin (c. 1565-1629), De Picturis in museis Dni Andreae Vendrameni positis (London, The British Library, Sloane 4004, fol. 60). The Bordone painting at Petworth House, however, was overlooked by the museum staff for decades and shown there for the first time in 2016. The painting might of course be a version of the work in the Vendramin collection (see note 51), if only because it slightly differs from the reproductive drawing. The Dutch art dealer Gerrit Uylenburgh (c. 1625-1679) may have bought the work when it was part of the Reynst collection in Amsterdam (see next note). Uylenburgh’s inventory, made up in 1675, mentions ‘a female tronie of Bordon’; the painting was valued at 30 guilders in the same year. See Lammertse/Van der Veen 2006, p. 96, no. 6, p. 98, fig. 56, p. 297, no. 27, p. 301, no. 23. Uylenburgh could have taken the work with him when he moved to London. The Bordone was likely acquired for Petworth House by George Wyndham, the third Earl of Egremont (1751-1837).

15 Tronies were often made for the open market, but could also have been executed on commission. A factor in the choice for tronies seems to have been their potential for the display of virtuoso pictorial effects, such as the handling of colour, light and the (exotic) costume, which could tempt clients to buy works of art from the artist. Perhaps Ovens’ Young Woman served such a purpose as well. A number of paintings in which the Venetian courtesan ‘portrait’ found a Dutch counterpart might have been intended for luxury brothels (such as the paintings of Backer, Bol, Drost and Flinck dealt with above), from which the client could make his choice. See De Passe 1630; Sluijter 2006, p. 324, 325, fig. 308. No author has noticed that Maria was pregnant or just became a mother when the painting was done. Her first child, Agnetha (1655-1676), was baptized in Friedrichstadt on 14 October 1655. See Köster 2017, p. 336, Qu. III.A.1 (right column). This might have increased Ovens’ attachment to the work.

17 Dauw 1721, p. 290. It is reasonable to presume that the tronie being dealt with here is the original painting at Gottorf castle mentioned by Dauw, considering the fairly high quality of the work, its apparantly genuine signature ‘J. Ovens’ in the middle right, and the fact that until now only copies of a lesser quality have resurfaced. See also Schlüter-Göttsche 1975, p. 69 and Schlüter-Göttsche 1969B.