Up till now, it has not been possible to determine with certainty whether Ovens painted his self-portrait from circa 1652 in the Hamburger Kunsthalle [3] in Holland or in Northern Germany. The identification of the sitter is based on his likeness of Ovens’ sure self-portrait that forms part of his epitaph in the church of Saint Lawrence in Tönning [4].1 On both self-portraits, Ovens seems to be around 30 years old, so the Hamburg painting was likely created in the first half of the 1650s.2 In 1651, Ovens left Holland for several years. He received privileges from duke Frederick III of Schleswig-Holstein-Gottorf in the following year, which might have tempted him to paint this self-portrait.3 Therefore, in this essay it is assumed the painting came about in Northern Germany.4

There is a good chance that Ovens based this work (partly) on Rembrandt’s famous etched Self-Portrait Leaning on a Stone Sill of 1639 [6] and his related painting from 1640, Self-Portrait at the Age of 34 [5].5 However, whereas Rembrandt’s arm rests on a balustrade, Ovens leans on an imaginary similar structure.6 This, together with the fact that Ovens portrays himself closer to the picture plane than Rembrandt does in his etching, creates a different spatial effect.7 Furthermore, Rembrandt turns his body more towards the viewer than Ovens. As has been stated many times, in creating these self-portraits, Rembrandt drew inspiration from Titian’s Portrait of Gerolamo (?) Barbarigo of circa 1509/10 and Raphael’s Portrait of Baldassare Castiglione, executed some five years later, both of which Rembrandt saw in Amsterdam in the collection of Alfonzo Lopez (1572-1649).8 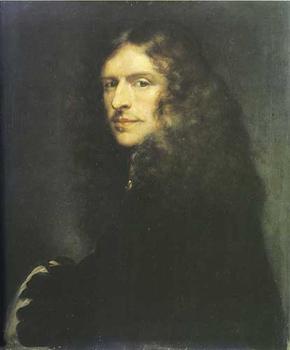 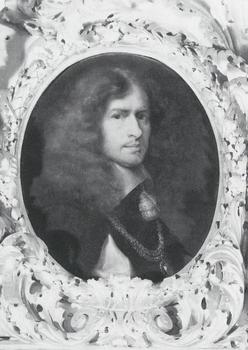 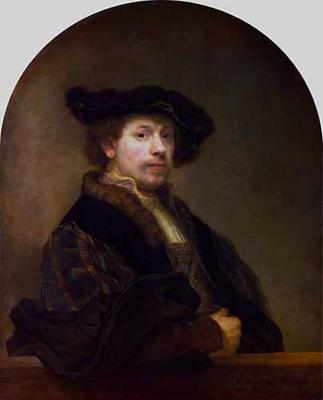 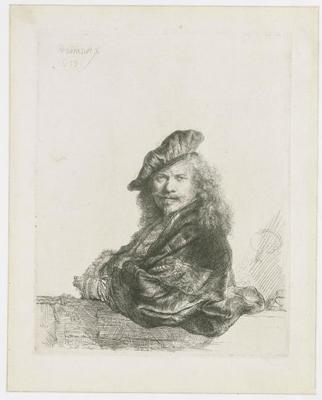 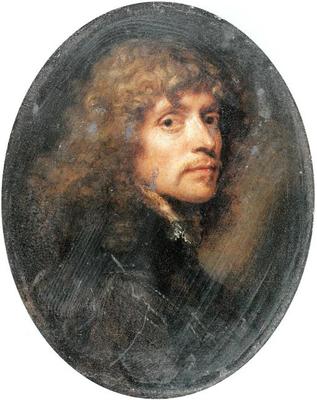 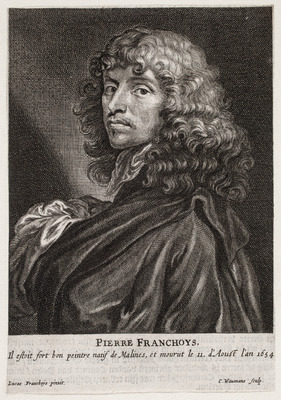 Ovens probably also took similar self-portraits by Govert Flinck [2] and Ferdinand Bol (1616-1680) into account, which were derived from the two Rembrandt self-portraits.9 However, he ‘modernized’ the early 16th-century dress of Rembrandt, Flinck and Bol and left out their beret. As for his self-portrait, Ovens might have been inspired by an engraved portrait depicting the Flemish baroque painter Peter Franchoys (1606-1654) from 1649 as well [8].10 Koenraad Waumans (1619-1661/73) possibly engraved Franchoys’ portrait after an oval miniature by Lucas Franchoys the Younger (1616-1681) [7].11 Remarkably, more than in the portrait print, Peter Franchoys’ facial features in the miniature resemble those of Ovens.

The portrait of Peter Franchoys is visibly influenced by the way in which artists are depicted in the so-called Iconography: a large series of portrait prints of famous men and artists after Anthony van Dyck (1599-1641), developed between circa 1632 and 1644.12 In these eloquent, aristocratic portraits, which became extremely popular in Holland and Flanders, a beret and utensils are left out in order to prevent the artist from being considered a ‘mere’ craftsman. Their central motif is the twist of the artist’s head over his shoulder to emphasize his powers of intellect and invention.13 Van Dyck’s virtuosi exhibit a rich variety of gestures in order to emphasize their agility – contrary to Ovens, Franchoys holds his left hand in front of his breast to indicate the creative urge of his mind. The fashionable, expensive black cloak of Franchoys and Ovens is essentially a sign of dignity and was almost always worn by Van Dyck in his self-portraits.14

With his self-portrait, Ovens introduced a novelty in Northern Germany in the early 1650s. In fact, self-portraits by artists were barely known there.15 We may assume that Ovens’ painting remained in private collections in the 17th and 18th centuries. Except for a rather stiff copy of an unknown artist [9], the work does not seem to have been imitated in Ovens’ native region.16 It is no coincidence that a fashion-conscious artist like Ovens based his painting not only on Rembrandt’s self-portraits from 1639 and 1640, but also partly on Van Dyck’s Iconography. 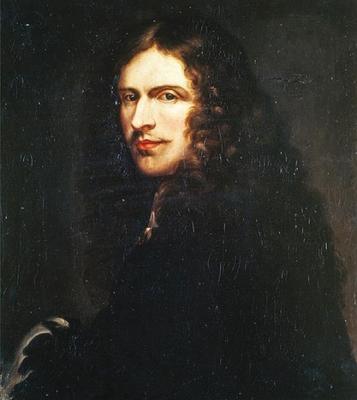 3 Through his Hamburg self-portrait, Ovens might have confirmed and celebrated his improved social and financial position and exhibit self-assurance. Of course, he could have created the work in (about) 1650 in Amsterdam, but seemingly there was no special occasion which prompted the artist to portray himself.

6 No research has been conducted on a possible shortening of the bottom of the painting.

8 Raphael’s portrait is in the Musée du Louvre, Paris (RKDimages 292531) and the painting of Titian, in the 17th century mistakenly assumed to depict the Renaissance poet Lodovico Ariosto (1474-1533), in the National Gallery in London (RKDimages 281114). Perhaps Ovens saw these works, since he must have been in Amsterdam from at least c. 1638. The influence of these Italian examples is less pronounced in Rembrandt’s self-portrait from 1640, however. The only elements that clearly recall Raphael are the use of colour and the contours of the figure, while the position of the arm appears to be derived from Titian. The entire lower arm, rather than only the elbow, rests on the balustrade. This pose resembles a well-known self-portrait from 1498 by the German artist Albrecht Dürer (1471-1528) in Museo Nacional del Prado, Madrid (RKDimages 297609). Rembrandt’s North-European fashion, outdated for well over a century, was known to him through prints by Lucas van Leyden (1494-1533). As Buijsen/Schatborn/Broos 1999-2000, p. 173-175 explain, the self-portrait from 1640 should therefore not be discussed solely in relation to Italian examples, as is usually done, since it also refers to the painting tradition of the North.

15 Christopher Paudiß (c. 1625/30-1666), an artist probably born in Hamburg who was a pupil of Rembrandt in Amsterdam in the mid-1640s, looks over his shoulder in a self-portrait which he probably painted in Freising, Southern Germany in c. 1665 (RKDimages 269542). See C. Roll in Hahn et al. 2007, p. 214-216, no. 5, ill. Paudiß wears old-fashioned dress and a hat; his self-portrait was inspired by Rembrandt’s etching from 1639. It seems unlikely Paudiß knew Ovens’ self-portrait. Although a 1682 self-portrait by the German artist Michael Willmann (1630-1706) (RKDimages 239367) resembles Ovens’ self-portrait, it will have been based on a Van Dyckian portrait type that he might have seen during a study trip to the Dutch Republic around 1650. There is no proof Willmann ever visited Schleswig-Holstein. See E. Houszka in Klessmann/Steinborn et al. 1994, p. 116-117, no. 19, ill. Sarah Babin recently completed a PhD under the supervision of Andreas Tacke, titled Das deutsche Selbstbildnis im 17. Jahrhundert, in which she demonstrates that German painters strove to rise to the level of their European contemporaries through their self-portraits.