Ovens probably became acquainted with Dutch and Flemish art from an early age on in Tönning, where Lorenz de Keister, who originated from Holland, possibly taught him. The port city was home to a large Dutch colony, including a number of artists. Ovens’ father, the Lutheran Ove Broders (died 1652), was a wealthy businessman. As a shipowner, he regularly sailed to his factory in Amsterdam. Ovens continued his training in that city, maybe as soon as from 1637. For aspiring young artists from Northern Germany, it was customary to complete their education in the Netherlands, considering the numerous fine workshops over there.1

According to Arnold Houbraken (1660-1719), Ovens was one of Rembrandt’s (1606-1669) pupils.2 It is doubtful, however, if Ovens actually studied under the great master, since there are few specific stylistic and compositional influences from Rembrandt that can be discovered in Ovens’ oeuvre. His identified early portraits make it more likely that he was a disciple of Govert Flinck (1615-1660), the front man in the workshop of Hendrick Uylenburgh (c. 1587-1661) – perhaps Broders introduced his son to that studio.3 At Uylenburgh, Ovens could develop into a first-rate portraitist, the genre for which the workshop was highly reputed. One of the most important training methods in 17th-century studios was to imitate the master. Ovens must also have copied works of other established Dutch painters.

During his formative years, Ovens likely read about the theoretical notion of rapen (to collect, pick up, gather, or even steal), primarily associated with mindless borrowing.4 Contemporary Dutch art theorists wrestled with the concepts of ‘bad borrowing’ and ‘good borrowing’. If the artist did well, it served as praise of the master from whom he borrowed. This created an unsolvable paradox: on the one hand, borrowings had to be unnoticed, but on the other hand, they should be considered as paying homage to a master.5 In addition, Ovens will have heard about aemulatio (emulation), an activity directly connected with, but more praiseworthy than, imitation: ultimately surpassing an admired example. Not much was written about the concepts of imitation and emulation in the art literature of the 17th century; the sources that have come down to us are a minimal reflection of the much more extensive oral tradition, making it very hard to understand the ideas then attached to emulation. Thus, how Ovens would have experienced and interpreted these notions in practice is not easy to tell. Furthermore, unlike Peter Paul Rubens (1577-1640), Ovens did not develop a theory of imitation in the course of his career.6

From the late 1640s onwards, Ovens adapted the so-called ‘clear’ manner, since this ‘bright’ style, which reminds of the evenly illuminated, colourful paintings of Anthony van Dyck (1599-1641), became the preferred taste in art among Amsterdam’s elite. Many paintings of Ovens testify of his enduring admiration for this famous Flemish master. 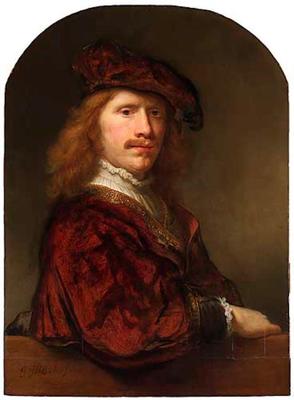 4 Van Mander 1604, fol. 5r advised young painters to ‘Steal arms/legs/bodies/hands/feet/’tis here not forbidden/whosoever wishes/must play the part of Rapiamus/Well-cooked pickings make good pottage’. We may assume that the literate Ovens was familiar with the publication of Karel van Mander (1548-1606). See also Broos 1985, p. 12. Regarding the art of the Northern Netherlands of the 17th century, Emmens 1968, p. 111-115 has delved into the theory – in so far as one can speak of a theory – of borrowing from other artists. The phenomenon is subjected to further analysis by Miedema 1973, vol. 2, p. 389-390 (his commentary on Karel van Mander, Den Grondt der Edel vry Schilder-Const [Foundation of the Art of Painting]).

6 Muller 1982, p. 244 noted that the terms imitation and emulation have not been given a precise and generally accepted meaning in the literature. For the concept of emulation: Boschloo et al. 2011.