12.3 Group One : Inscriptions on the Verso

1 – Rocky landscape with Saint Jerome in the wilderness

The Szépmüvészeti Múzeum in Budapest holds in its collection a drawing which shows the hideout of a hermit in the rocks with trees in the background.1 The inscription on the verso reads: ‘naer gillis van coninxloo / historie van Jeronimus / heeft gemaeckt francois / Frandael / 121 / 1590’.2

The theme of the cloistered hermit in the wilderness was very popular in early 16th-century landscapes. Here, the hermit himself is missing, though we know by the inscription this must have been the refuge of Saint Jerome. It is telling that the copyist only repeated the landscape, and not the figure, even though he included this information in the inscription. Currently, we are unaware of any such landscapes by Gillis van Coninxloo. Nevertheless, as the inventory of his estate lists a variety of paintings by the master himself, we do know that he did not limit himself solely to panorama or forest landscapes.3 Apparently, a ‘Francois’ drew this copy after Van Coninxloo after which someone else wrote the inscription on the verso. Francois was probably someone who lived in Frankenthal, yet no mention of a certain Francois can be found in the literature so far.4 The indication of the date 1590 and the place Frandael, most certainly referring to Frankenthal, is rather significant. This affirms that Van Conxinloo was indeed producing work during his stay in Germany, such as this landscape with a typical 16th-century theme combined with a more innovative low horizon. As the album in the Narodni Galerie contains copies of paintings as well as drawings, such as the ones of Hendrick van Cleve, we have to remember that the original artwork may have been either of these two types. 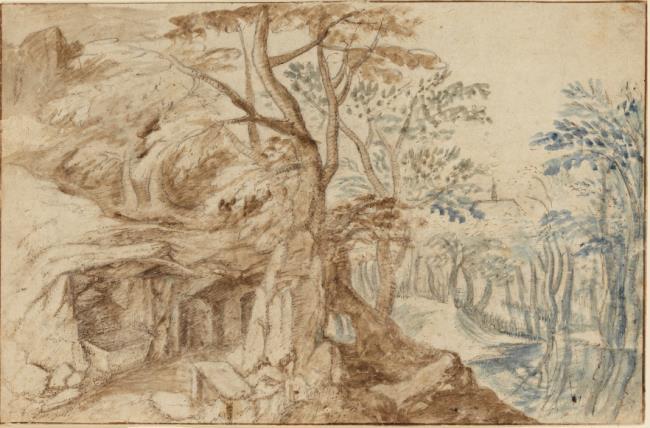 The inscription of a second, and more colorful drawing, is just as precise regarding the subject portrayed. On the verso of this view of cornfields with several houses we read:

‘near coninxloot, albr..., daer quam / in de historie vann daer Josephs / bruers quaemen coren haelen / amsterdam / 1596/ 118’. This inscription refers to a scene from Genesis, where Joseph, once sold as a slave by his brothers, is now serving the Pharaoh in Egypt (Genesis 42). When a famine breaks out in Canaan, his brothers come to Egypt for grain, but fail to recognize their abandoned brother. This sheet is dated 1596, and mentions Amsterdam. By this time, Van Coninxloo was indeed resident in this city. The shortened ‘Albr.’ refers to Albrecht who could be the draughtsman of this copy. 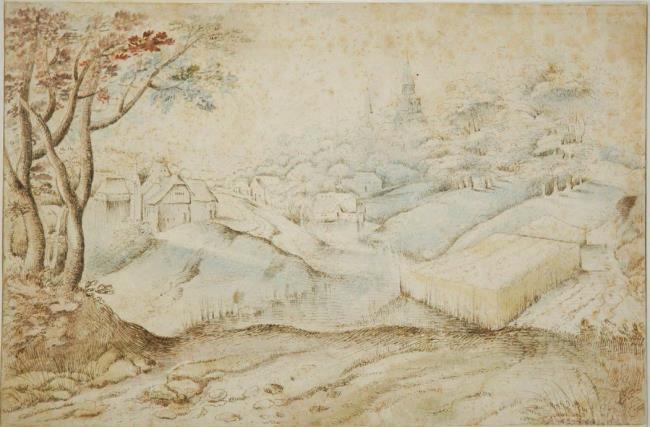 3 – Forest landscape with a view of a distant coastline

A third drawing shows a rather typical, high view landscape, seen from in the woods, looking down on a coastal valley. .The verso reads ‘near coninxloo / Albrecht, tot Amsterdam/ 123/ 1597’. Here we see the combination of a forest landscape and a panoramic landscape which demonstrates that Van Coninxloo was skilled at portraying both kinds of landscape before 1597. Albrecht is mentioned again, and as the style resembles the one of the drawing above, it is most likely that he drew both of them. Therefore it seems reasonable that when he uses his own name, he is indeed the author of the copy drawing. 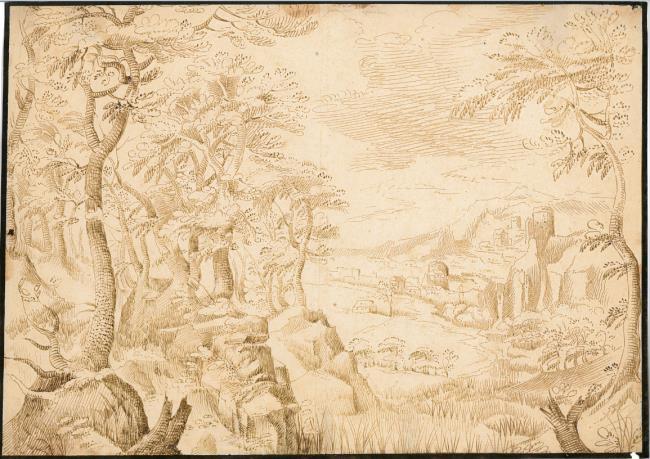 4 – Landscape with trees and a view on a castle

A quite similar landscape with a higher view down to a lower valley is also dated 1597.The inscription reads naer conixloo / A tot amst[erdam]/ 1597 / 127. It shows a similar hand at work as in the former drawing. The shortened ‘A.’ for the inscription most likely refers to Albrecht. 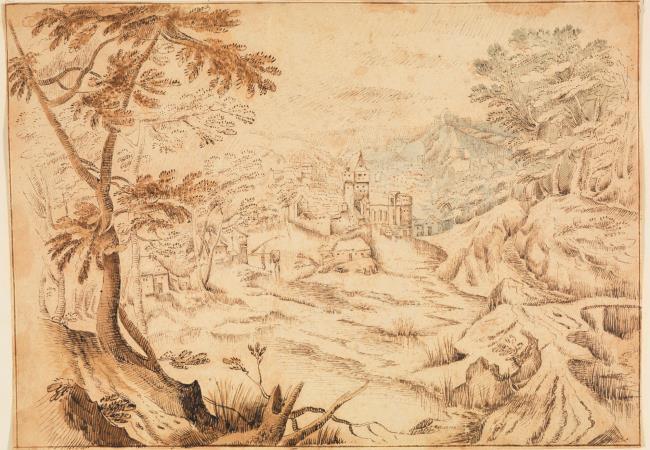 5 – Rocky landscape with the cave of Saint Anthony

The last drawing with an inscription on the verso reads: ‘Near Coninxloo / tot Amsterdam / Abrecht, Sint Antonis / 123 / 1596’.5 Like the Budapest drawing, which also is dated 1596, it portrays a hermit’s shelter as well, but this time of Saint Anthony.

This drawing is rather complex as Jan Brueghel the Elder had already painted a similar landscape in 1595 for Cardinal Borromeo, now on display in the Pinacoteca Ambrosiana, while the copy is dated 1596.6 As it is certain that this date refers to the making of the copy drawings, and not to the original, it is possible that Van Coninxloo made a similar landscape even before 1595.7 It is also possible that both Van Conxinloo and Jan Brueghel worked on the same compositions of Pieter Bruegel the Elder as suggested by Teréz Gerszi. 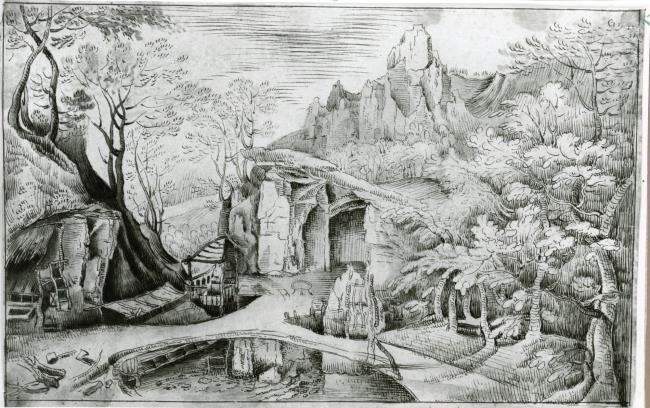 2 I am grateful to Angela Jager who helped me with the transcription of the inscriptions.

3 The inventory also lists a rather atypical ‘Een steenrootsken van Coninxloo met een vergulden lijst’. This indicates that other rocky landscapes were included in his estate.

4 Unfortunately, I was unable to research the Frankenthal archives myself in the scope of this article; my knowledge of this source goes as far as this was published in Hürkey/Bürgy-de Ruijter 1995.